Cleveland Federation of Square and Round Dance Clubs

In 1984 we took square dance lessons thru a community education program and upon graduation began dancing monthly with caller Bob Howell’s Basic level group.  Mary’s claim was “if we start dancing, you will leave work at a reasonable hour once in a while.”  That certainly proved to be true.  After a second community education set of lessons, we also started dancing with Bob’s Mainstream group in Richmond Hts.  We enjoyed dancing once a month with those groups until about 2003 when the groups folded and raising our kids took priority. 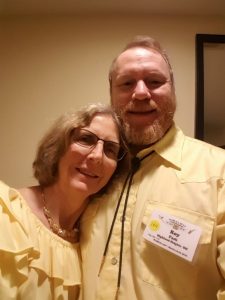 In 2011, after sending away the last kid to college, we had time to start dancing again.  We took Plus lessons with Broken Wheel Squares and met a whole new dancing family of friends!  Today we are still active and enthusiastic dancers, usually dancing 3 or 4 days a week.  We like to go out visiting other clubs to dance with both experienced dancers and the newest students, and it isn’t unusual for us to split up to dance with single dancer partners.  We also enjoy dancing at weekend dance events – last year we danced in 8 states, and this year our dancing took us as far west as Wisconsin, as far east as Virginia, and as far south as Georgia.

We are currently the Vice Presidents of Broken Wheel Square Dance Club and the Friday Night Mixers, serving as officers in both clubs for multiple years.  We are also the co-chairman of the Rockin’ Dance Fest.  We help facilitate the Sweetheart dance each year by renting the hall on behalf of the hosting club.  We have been active in assisting with the Ohio Dance Convention, and we haven’t missed attending this yearly event since we started dancing again in 2011.  In 2013 we accepted the position of Vice Chairmen of Sew & Save for the 66th NSDC in Cincinnati, and in the following years we travelled to national conventions in Little Rock Arkansas, Springfield Massachusetts, and Des Moines Iowa to help prepare for running Sew & Save at the 66th NSDC.

Thanks for reading and Live Lively!

In 1996, with some uncertainty, I was thrust into the world of square dancing when my then-husband, Milton, decided he would play a joke and left a message for Brecksville Squares of a senior citizen i need of some physical activity. Cheryl Storgard, Brecksville’s President, called and asked for the senior citizen in the house. (I was 37 at the time.) Milton handed the phone to me with a smirk on his face. Cheryl informed me of

their lessons and I, with my own devilish grin on my face, stated that “WE” would love to come, much to the chagrin of my prankster husband.

I immediately loved learning to square dance. Milton, no so much. We graduated in 1997 and became members of Brecksville Squares. We even “angeled” some in the next year, but Milton soon lost interest in dancing after attending an “All Caller Special” and breaking down the squares a bit too much.

I would love to say that I kept dancing when he quit, but sadly I didn’t.  UNTIL . . . after much prompting from Rose Gelman and Rita Lambert of Broken Wheel Square Dance Club, I became a re-tread in 2009, taking lessons again and joining the club.  It has been awesome rejoining the square dance family.

I have been an active Cleveland Federation Representative for the past 6 years and was Federation Treasurer for two years.  I am the immediate past president of Broken Wheels Squares, serving in that capacity from 2015-2017.  I am currently serving as Class Coordinator and Recruitment Chair for our lessons and as Alternate Federation Rep.

I have assisted with several Ohio State  Conventions and three National Conventions where most recently I was the “Director Of The Showcase of Ideas” at the 66th NSDC in Cincinnati, June 2017.  It has been my pleasure to serve the members of my club and the square dance community.  Thank you for this nomination. I am truly touched by your kindness.